The Club was founded in 1986 arising out of the ashes of another Club in Stowmarket. From that date until 1995 it played in the United Reformed Church in Ipswich Street. It was a very good base for the club for 9 years although not ideal as it was two floors up so disabled access was impossible, and the club could only put up 5 tables. In addition the number of members increased to a point where it was clear that a larger facility was required.

Table Tennis as a sport in Stowmarket has always been popular so in 1994 the Committee began to think about a move to a larger centre in order to provide better facilities. Following a season of negotiations it was decided from 1st September 1995 to base all Table Tennis locally at Stowupland High School where the Club would have the option to have 18 tables for competitive play, and the ability to cater for larger numbers of players.

The move enabled sessions to increase from two per week to operating on four nights each week, and some weekends. The membership rose to some 150 and junior club night on a Friday sometimes had over 60! As a result the drama studio had 6 tables in addition to the 12 in the gym.

The Club applied for a grant from the Foundation for the Sports and Arts towards new equipment and were lucky enough to be awarded £7,400 in early 1996 to enable the purchase of 11 competitive play tables plus nets, 2 international standard tables plus nets, scoring machines and barriers. 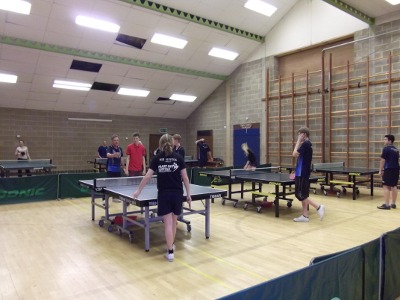 In 1998 Stowupland High School received a grant under the National Lottery in excess of £200,000 with their application being built around the development of the gymnasium into a County table tennis centre. The gym was extended and the lighting upgraded but as a result of delays and rising costs the roof at the far end was sloped rather than the planned rather than being the same height as the remainder of the hall.

Over the years the club has bid successfully for a number of other grants that has permitted working with people with disabilities and putting tables in local primary schools. For many years this also included providing coaching within schools but that has now been hit by the present government’s cuts in funding for sport within schools.

Central to the club’s philosophy is the requirement that the facilities are open to all levels of ability, juniors and adults, including disabled players. Coaching is provided at junior sessions with some ad hoc coaching on request for adults. 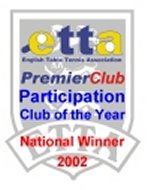 The club has won many awards over the years but the most notable ones were Tony Mooney recognised as Development Officer of the Year for England in 2001 and the club winning the Club of the Year 2002 at participation level for the Eastern Region and shared the natonal award for the whole of England. The club also has been awarded Clubmark status which recognises that it is a safe environment for young players with all coaches and junior session leaders being CRB checked. Other training is provided such as first aid. 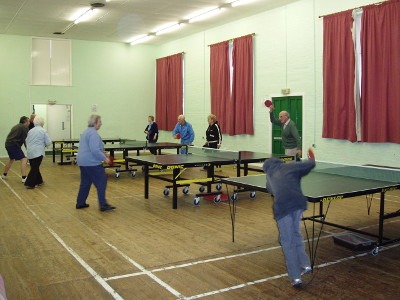 It had long been an identified need to have daytime sessions but having its base in a school this was not possible there. In 2006 it was decided to find a second venue to meet this need and this led to St Peter’s Hall in Stowmarket where a Monday morning session was set up in that year.

The following year the Over 50’s group at Mid Suffolk Leisure Centre asked if they could move to St Peter’s which they duly did with all the players becoming members of the club.

They play on a Thursday afternoon and both daytime sessions continue and are very successful.

All that has been written here so far has been about social table tennis but the club also caters strongly for the competitive player. In the past season six teams were entered in the Bury St Edmunds & District League along with junior teams in the National Cadet League and the Suffolk/Cambridgeshire junior League. The age range of these players goes from 11 years old up to over 70. Some of those who play in the over 50’s are well into their 80s.

For a few years spanning 2004-2007 the club had team in the British Junior League reaching the Premier Division in 2006/7. The team was put together by our then Director of Coaching, Peter Avenell, from players from around the country. One of these was Chris Doran who is now an England International.