The Club was well represented at the County Junior Singles tournament which took place recently at Stowupland. There was also success in several of the events. Lewis Roberts was winner of the U11 Boys event; both finalists were from Stowmarket in the U13 Boys event, with Luke Davies-Stokes beating Albert Roberts.

James Davies-Stokes was runner-up in the U15 & U18 events, on both occassions he was beaten by Kian Burgess; however, he did turn the tables by beating Kian in the final of the handicap singles.

Luke Davies-Stokes and Lewis Roberts were the winners of the Pot Luck Doubles. Wayne Shaw has produced a full report of the days play. 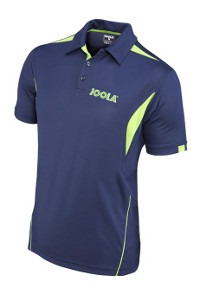 Following enquiries from several members, the Club has ordered new shirts. These have arrived with the Club name and team or player on the back.

First reports from those that have received theirs are very positive with players commenting not only on the ‘look’ but also the ‘feel’ of the new shirt. Any further enquiries to Club Committee Member Lee Balaam.

The Club has just got a new badge which has been designed by Chris Smith. A free badge will be given to all members; further badges may be purchased from the Club. [Contact us.] 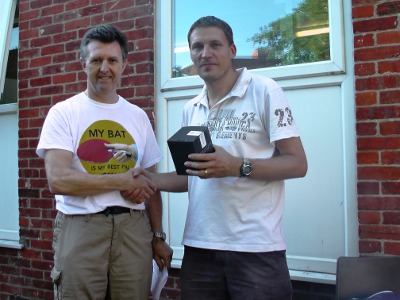 The Clubs summer barbecue took place on Sat 27th June in the garden of St Peter’s Church Hall in Stowmarket. The weather was kind and the event was attended by over 50 members and their families; everyone that attended said they thoroughly enjoyed the day and hoped there would be another next year.

The event also marked the end of Lee Balaam’s stint as Club Captain; Lee is taking some time away from the competitive side of things but will continue playing and also his role as Club Chairman. In the photo you can see new Captain David Gough presenting Lee with a tankard as a mark of appreciation for all his efforts.

County Player of the Year 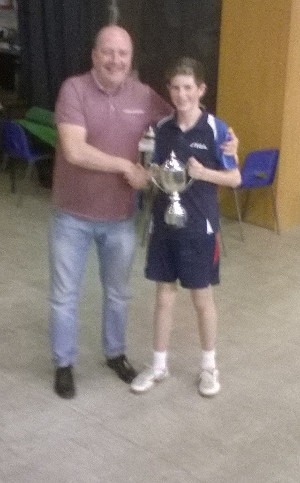 At the County AGM, held in Stowupland on 23rd June, James Davies-Stokes was awarded the Doris Fox Trophy for the outstanding player of the year in the County. The award was presented by County Chairman Paul Burgess. A quick look over the news items on this page will show you what a successful year it has been for James and what a worthy winner of the award he was.

Other awards given out at the AGM were for the young improver of the year, which was presented to Jess Pengelly and the Dennis Barrett trophy for outstanding services to table tennis in the County which went to Jack Perkins.

National U11 - U14 Championships

Junior Club members James and Luke Davies Stokes recently took part in the National Championships which was held in Sheffield. Luke progressed out of the group stages in the U11 event and then got a bye to the second KO round, in this he narrowly lost by 3 games to 2. Unfortunately James didn’t get passed the group stage of his age group event, but he reached the quarter-final stages of the doubles event partnered by Kian Burgess.

This was an excellent performance by both boys, who are still young enough to return to the event in future seasons

Each session all the matches on one table were recorded so you can see James’ match against at 1:25:00 in the YouTube video below. There is also a delightful cameo appearance by dad Richard at 0:56:00

This article about our teams performance in the Bury St Edmunds & District League this season, appeared in Stowmarket In Touch recently. 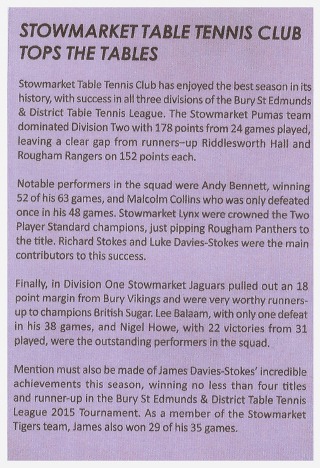 After several weeks of qualifying matches the Clubs finals night got under way on Sat 18 April at St Peter’s Church Hall in Stowmarket. The first two matches were the semi-finals of the open-singles, these featured husband & wife, Lee and Sandra Balaam, but fortunately not against each other!

In the first semi-final, Sandra took on Nigel Howe, who got off to a good start winning the first game, Sandra immediately pulled a game back to level the score, the third game proved decisive with Nigel narrowly winning 11-8 after a good start from Sandra, Nigel then went on to win the 4th game 11-7 and the match .

The second semi-final had an unexpected start with cadet James Davies-Stokes beating Club Captain Lee Balaam 12-10, unfortunately for him he just couldn’t hang on and Lees experience proved vital in winning the next 3 games and the match.

In the Junior Singles, James took on his younger brother Luke and on this occasion the match went with age, James winning 3-0.

After a brief rest it was time for Nigel to put down his modern, sponge & rubber plated bat and return to the old days using a sandpaper bat provided by the Club for the Hardbat final, his opponent was David Gough using a similar bat; as etiquette dictates they swapped bats with ends but Nigel was again a comfortable winner.

As the evening was intended as much to be a social occasion as a competitive one, play stopped so everyone could tuck into a buffet provided by Pickwick’s, this was a chance for different parts of the Club to mingle and get to know each other. All too soon, it was time to put the plates down and return to the match table.

The first match of the second half was a senior doubles featuring Phil Rampley and Margaret Burch against Lynn Allen and Peggy Took. This match confirmed that table tennis is definitely a sport for all ages; Lynn & Peggy eventually winning a very close match by 3-1.

Next it was the turn of the Juniors to demonstrate their doubles skills; James Davies-Stokes and Lewis Roberts took on Jack Samson & Luke Davies-Stokes, James & Lewis again winning 3-1

The penultimate match of the night was the Restricted Singles featuring Scott Day and Pete Bernard; Scott had all his family supporting him and this proved too much for Pete.

The evening closed with the Final of the Open Singles and what a match it was between Nigel Howe and Lee Balaam. Lee just edged the first game 13-11 but Nigel fought back to win the next 11-9 and then it was Lee’s turn to win the next also 11-9, but Nigel then pulled out all the stops to win the next 2 games 11-5 and 11-6 to take the match after an exciting 5 sets.

Our thanks to Bob Watts who umpired all the matches and to Chris Smith who was MC for the night, Tony Mooney took the photographs which can be seen in the Gallery. All the results from the tournament are here.

The League’s annual tournament took place in the Dome at King Edward VI Grammar School in Bury on Sun 22nd Mar. There were a record number of entrants – 47 which meant a very long day for some of the players and the organisers!

Our Club was also very well represented with 11 players taking part and in a day of unprecented success the Club had at least one player in the final of every event.

As you can see James Davies-Stokes had a very successful day, playing a phenomenal number of matches, he still finished the day with a smile. I’m not sure all his homework got done though…

Finally, many thanks are due to the tournament organisers Mark James and Phil Sinclair for all their hardwork in putting together a great day for so many people.

The competition took place at Stowupland on Sun 25th Jan. With both the main hall & Gym in use there were a lot of matches to get through.

7 of our young players took part and 5 of them got medals. James Davies Stokes got gold in the Boys Under 13 as did his brother Luke in the Under 11s. Albert Roberts got bronze in the Under 11s and Megan Bollen got silver in the Girls Under 19.

The other player was Joseph Kulesa who won one of his group matches in Boys Under 13s. He is at the bottom of the age range playing against some players who were up to 2 years older; so he should do even better next time.