The finals of the Clubs annual tournament took place on Sat 6th May at St Peters Church Hall in Stowmarket. As always it was good to see friends and family there supporting the players. As has become customary Chris Smith acted as Master of Ceremonies, prizes were presented to the winners and runners-up by new Club Chairman Richard Stokes. A full set of results for the qualifying rounds and finals can be found in the results file. 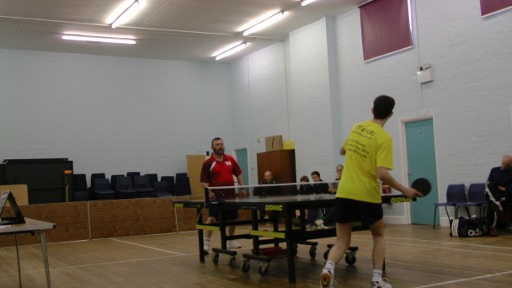 Play began with the Open Singles semi-finals, in the first of these Junior player James Davies-Stokes took on a more mature Scott Day on this occasion youth won out over experience with James winning comfortably 11-4 11-6 11-8.

The second match was an all Pumas clash between Luke Davies-Stokes and Martin Chamberlain, this proved to be much closer with Luke winning the first game comfortably before Martin fought back to win the next two.

Luke again turned on the magic to win the final two games and so was the winner by three games to two.

The first final of the afternoon was the Restricted Junior Singles which was open to Juniors not having a County ranking. It was contested by Joseph Kulesa and Jamie Hyde both of whom have been club members for some years now. Jamie got off to a good start winning the first game 11-7, the second game was much closer but again Jamie came out on top by 13-11. Jamie then sealed victory by winning the third 11-9.

The last match before the break was the Hardbat final between Chris Smith, temporarily relinquishing his M.C duties and another appearance from Scott Day. For those of you not familiar with the ins and outs of the hardbat game have a look at our hardbat corner. This proved to be an exciting and entertaining match with Scott coming out on top by three games to one.

It was then time for refreshments and a chance for a chat and catch-up. Thanks to all those that bought along snacks to share. Due to some car issues the timetable was slightly changed and the first match after the break was the Junior Singles final.

The final was contested between brothers James and Luke Davies-Stokes both club members for some years now. Luke has attained a National ranking of 20 at under-13 level and older brother James is currently ranked 78 in the National Juniors. James took the first game by 11-8, then Luke the next by a much closer 17-15 margin, the next two games went to James by 11-7 and 11-6, so James was the Junior Singles Champion. The prizes were presented by ex-Chairman Lee Balaam and this gave the Club the opportunity to than Lee for all his efforts on the Club’s behalf over the years.

Our Club isn’t just about the Juniors with the vast majority of our membership being over 50, so the next match was an opportunity to see some of those that regularly attend the Thurs Over-50’s session at St Peter’s in action. This was also the only doubles match of the afternoon, Lynn Allen and Phil Rampley taking on Tom Bennett and Richard Armitage. The first two games proved to be comfortable wins for Tom and Richard 11-8 and 11-4 before Lynn & Phil fought back to take an early lead in the third, however, they weren’t able to hang on and Tom & Richard ran out winners and Senior Doubles Champions 14-12 in the third game.

The penultimate final of the afternoon was the Restricted for players not playing in the Bury League Div 1, this was contested by Leopard Keith George and Tiger David Aldous. Keith took the first game 11-6 and the scores were then reversed, David winning the second also 11-6, again the scores reversed, the third was 11-6 to Keith who finally beat the sequence to win the fourth and the match by 11-9.

The afternoon finished on a high with the Open Singles final between James and Luke Davies-Stokes, these were the players that had earlier contested the Junior Singles final. The Open followed a similar pattern with James comfortably winning the first before Luke fought back to win a much closer second game. The spectators were clapping the exciting play between the two brothers, with James eventually winning 11-1 10-12 11-6 11-5.

Finally the Club would like to thank Bob Watts for acting as Umpire for all the matches.

We’ve signed up to a great new way to raise funds for Stowmarket TTC and we hope you’ll support us by taking part. Doing the weekly grocery shop? Booking a holiday? Buying anything at all online? Over 3,000 retailers – including M&S, John Lewis, Argos, Sports Direct, & Expedia – will give Stowmarket TTC a free donation every time you shop with them, at no additional cost to you!

How does it work?

Simply visit our GoRaise page and sign up for free. Click through to all your favourite online retailers and shop as normal. A donation is generated automatically when you make a purchase, and Go Raise will pass this on to us. No catches or extra costs.

If everyone took part we could raise £1000’s every year, simply in retailer donations generated by ordinary, everyday shopping. Remember – don’t just buy it, raise funds with it!

Many thanks – Stowmarket TTC