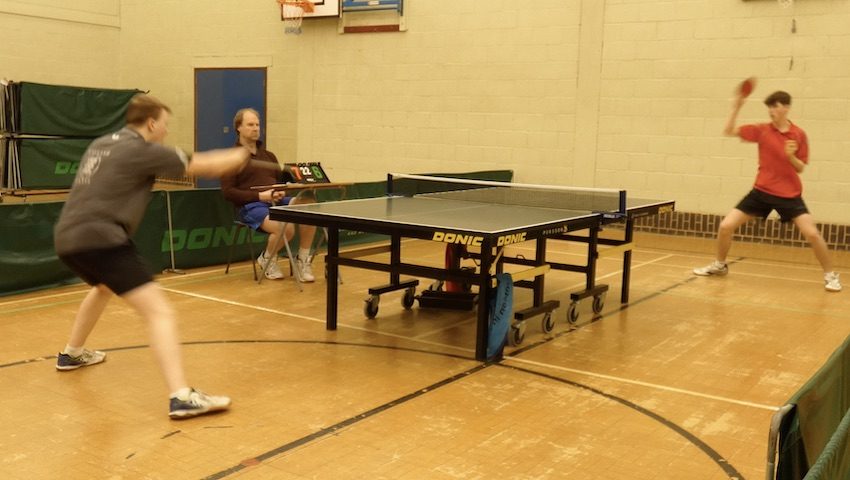 Sunday 7th April saw this season’s County Senior Championships held at Stowupland Sports Centre with nearly all of the top ranked Men and Women from the County competing for honours.

In the mens’ singles, for the second year running, youth prevailed over experience and the two top juniors again contested the final. Kian Burgess narrowly defeating James Davies-Stokes in five fantastic legs 13-11, 7-11, 8-11, 11-6, 11-7 to retain his crown and avenge his defeat to James at the recent Junior Championships. James had earlier defeated former champion Jake Collins in an epic semi-final and a mention too for Andrew Dosher for rolling back the years and defeating Richard Hutchinson in a great quarter final match.

Holly got her revenge when teaming up with younger sister Isobel to win the womens’ doubles and the mens’ doubles went to number one seeds Kian Burgess and James Davies-Stokes who retained their trophy.

The mixed doubles event was won by Alice Flatman and Richard Hutchinson defeating Kian Burgess and Lucy Needham in the final.

In the Handicap Singles all players were given a rating according to ability and played 1 single game up to 31. Alice Flatman (starting on 12) deservedly took the honours by

defeating Isobel McGerty (starting on 19) in a tense final 31-30, having earlier knocked out both the mens’ finalists along the way.

The results on the day clearly confirmed the progress being made by the junior players who continue to improve and develop under the fantastic tutelage of local coach Aad Kwakkelstein with 12 of the 20 finalists being under 18 years old.